Museum Exhibits with Art by SAK

In 2018, Our Steve Kaufman’s “Homage to Picasso, Guernica” was proudly added to the permanent collection in The Museo Nacional Centro de Arte Reina Sofía. It is Spain's national museum of 20th-century art. The museum was officially inaugurated on September 10, 1992, and is named for Queen Sofía. It is located in Madrid, Spain. 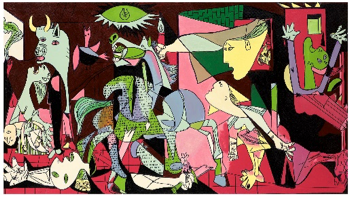