July 6, 2014 / Salzburg, Austria – American Pop Art, Inc. is proud to present the honorary painting “Mozart State II,” a portrait of Wolfgang Amadeus Mozart created in 1997 by the late American pop artist Steve Alan Kaufman (SAK) as a new, permanent addition to the Internationale Stiftung Mozarteum, the official Mozart museum and residence in Salzburg, Austria. Steve Kaufman is the first American artist to achieve this prestigious honor. An opening night celebration will be held on July 30, 2014 at 6:00 PM at the Mozart Residence, Makartplatz 8, 5020 Salzburg, Österreich, Austria.

“Steve's not physically here which saddens me greatly, but I know he is here in spirit. I know he is happy, honored and humbled. What an achievement this is to not only have your art in this amazing collection, but to be the first American artist there—it is just incredible. I am so happy and proud of him. This is a dream.” said Diana Vachier, president of Steve Kaufman Art Licensing LLC and American Pop Art, Inc., an online gallery at https://americanpopartinc.com that sells limited editions of Steve Kaufman art. Diana Vachier was recently named the sole heir to artist Steve Kaufman’s licensing rights.

Steve Kaufman is remembered as a great activist and a generous humanitarian. After serving as a young assistant to Andy Warhol, Steve Kaufman left The Factory at the end of the 1970s to continue his path of reinterpreting and refining the typical techniques of pop art. Steve Kaufman created his own style through the process of hand embellishment, giving life to his famous "icons" that appealed to audiences worldwide.

Steve Kaufman’s tremendous passion for art made him look backwards into history before he would proceed forward. He was deeply moved by the brilliance of the great masters of the past, art, music, and literature. In the mid 1990s, Steve Kaufman wanted to show his respect to those who preceded him and greatly influenced his life. And so, he did a series of paintings that included Leonardo Da Vinci, Rembrandt, Vincent Van Gogh, Beethoven, Shakespeare, and one of his most beloved paintings, Mozart. 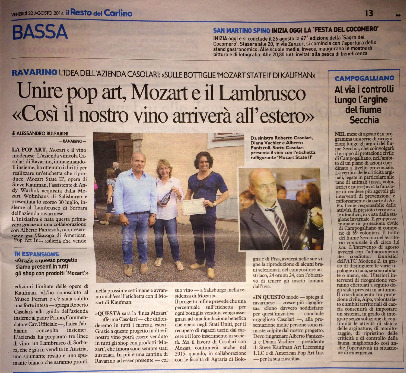