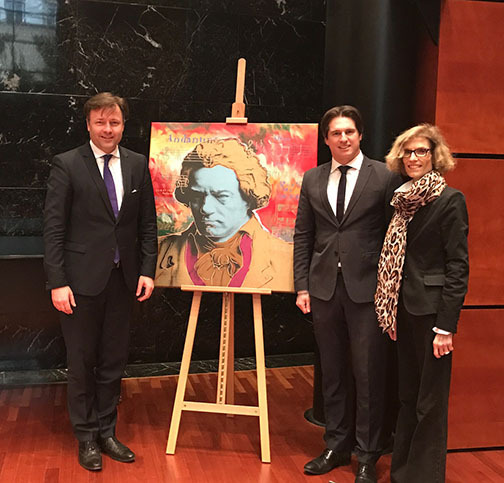 Malte Boecker, director at beethoven-haus, with Alberto Panizzoli and Silke Rau of Steve Kaufman Art Licensing LLC at the presentation of "Beethoven Blue" on March 17, 2017

March 4, 2017 / Long Beach, NY – American Pop Art, Inc. and Steve Kaufman Art Licensing LLC are delighted to announce that “Beethoven Blue,” a tribute painting of the famous composer created by American pop artist Steve Kaufman (SAK) will be unveiled on Friday, March 17, 2017 at Beethoven-Haus Bonn, the birthplace and museum of Ludwig van Beethoven in Germany, where it will remain on permanent display.

The honorary painting “Beethoven Blue” is a hand-painted oil on canvas silkscreen created in 1996 by pop artist Steve Kaufman as a tribute to the musical genius and historical icon. The striking 36 by 36-inch portrait with brilliant hues and accent notes from the composer’s musical compositions was gifted by Diana Vachier of Long Beach, NY, who worked alongside the late Steve Kaufman, former assistant to Andy Warhol. It was Warhol who gave Bronx-born Steve Kaufman the nickname “SAK,” using his initials.

Ludwig van Beethoven (1770-1827) was a German composer and pianist, and one of the most famous and influential of all composers. His best-known compositions include nine symphonies, five piano concertos, one violin concerto, 32 piano sonatas, 16 string quartets, his great mass the “Missa Solemnis,” and one opera, “Fidelio.” 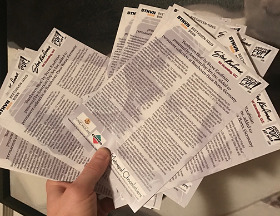