“Icons of Music, Then and Now” Steve Kaufman Pop Art Exhibition at The House of Music in Grado, Italy


August 15, 2014 / Grado, Italy – American Pop Art, Inc. is proud to present “Icons of Music: Then and Now,” a series of brilliant pop art portraits of the world’s most recognizable musicians, now through September 14, 2014 at The House of Music in Grado, Italy. This exhibition is curated by Serena Bobbo, and organized by the Municipality of Grado, and by Diana Vachier and Alberto Panizzoli of American Pop Art, Inc. and Steve Kaufman Art Licensing, LLC.

“Icons of Music: Then and Now” features original, unique portraits of famous musicians from Mozart to Michael Jackson—all painted by the late Steve Alan Kaufman (SAK), American pop artist and former assistant to Andy Warhol. Steve Kaufman is well known for his lavish use of color, and these crisp, impactful images will captivate people of all ages and restore memories of many songs.

Steve Kaufman’s tremendous passion for art made him look backwards into history before he would proceed forward. He was deeply moved by the great masters of art, music, and literature. And so, Steve Kaufman did a series of paintings during the mid 1990s to show his respect for those who preceded him and greatly influenced his life.

“Icons of Music: Then and Now,” offers visitors a vivid perspective of Mozart, Beethoven, Michael Jackson, The Beatles, Elvis, Frank Sinatra, and even Marilyn Monroe. The artist calls attention to these great figures, these icons that are now part of the collective imagination. These stars became significant reference points of their time—not only in music, but also as legends in television, cinema, and high society events. Steve Kaufman transforms the influence of these personalities into moments of meditation on fame. Kaufman himself wore hand-embellished apparel of the distinguished artist that he had become, but he never forgot the life he had before fame, the people he met along the way, and those who had inspired him.

Particularly significant among the works of Steve Kaufman, in the context of the exhibition “Icons of Music: Then and Now,” are those who represent Michael Jackson and Mozart. First, these two icons represent of the genius of modernity and the eclectic image. Second, they represent the geniality and immortal revolution of music. Both were child prodigies and stars of the stage in their lifetimes, and both prematurely passed away. Mozart and Michael Jackson, as distinct characters of time and history, become the 'face' that is the essence of the homage that Steve Kaufman pays to such “iconicism.”

Steve Kaufman shows us these characters, these 'icons' in a fresh, new perspective—Art about art that draws on art, listens, and calls back to the art. 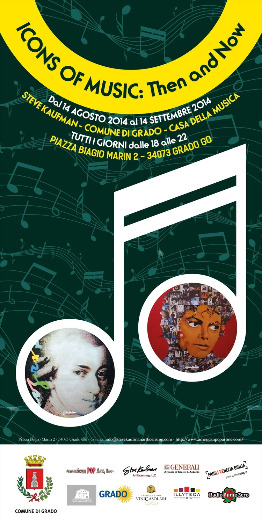